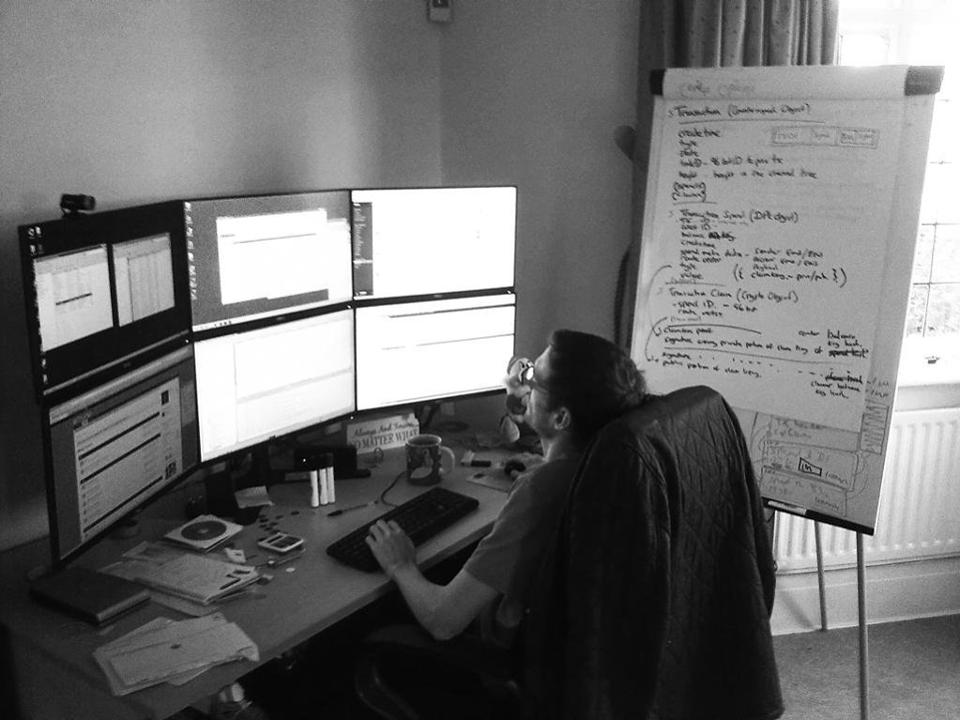 Dan Hughes , the creator and founder of Radix, is a perfectionist. There’s no other way to put it. He felt there were fundamental flaws in the Bitcoin protocol as conceived by Satoshi Nakamoto. Sure, he saw the beauty in it, but, he also saw limitations that he felt would inhibit the technology’s ability to truly serve humanity at the scale required. So, he set out to start with a blank slate, and began coding his own version to solve the Bitcoin trilemma of achieving all three necessities of a truly “infinitely scaling” blockchain to serve the world’s  billions of transactions per day. Those three necessities being: decentralization, scalability, and finality. Dan and his team are confident they’ve solved this trilemma with a result they say “isn’t even a blockchain”.

It’s unclear why it isn’t a blockchain, but that’s what they say. It took Dan 6 years, and multiple versions the code to finally develop the protocol, which he calls “Radix”. In fact, he bet his life savings, and his family life on the conquest. As described in a recent article in Forbes,  Dan “took over the dining room of his house in 2012, removing the  dining table and replacing it with stacks of servers, filing cabinets, white boards, six screens and a mass of cables.” As he puts it, this move was “much to the anquish of my wife”.

“there have been times when it’s been  quite depressing, and I spent the weekend in a bottle of whiskey”

He worked feverishly, in isolation, writing code until roughly 4 a.m. every morning. At one point he actually scrapped 18 months of work on one iteration of the base layer, named  “Tempo”. This “failure” brought on another blank slate, and subsequent down-sizing to a smaller home for he and his wife. As Dan puts it in a recent interview with Elsa Ramon, “there have been times when it’s been  quite depressing, and I spent the weekend in a bottle of whiskey”. Fortunately, Dan would still return to his “coding cave” on Monday to create an improved version of Tempo.

Fast forward to 2019, and his creation, Radix, will officially launch as a mainnet network in Q4 2019. I recognized some of the Radix guys when we came upon them at the Consensus 2019. We had previously met them when we conducted an interview with Dan, and Albert Castellana during our coverage of the Catalonian citizens protests in Barcelona, Spain. I was disappointed to learn that Dan would not be attending Consensus, but later was delighted when he suddenly seemed to appear out of nowhere at one of the many cocktail parties during New York Blockchain week. Even he seemed a bit surprised to have suddenly made the trip to NYC, which he says was only because he was told by his team that he needed to get on a plane and get over to America right away.

“Blockchain is a protocol where everyone agrees on what time it is, and in exactly what order things happened”

Dan is as casual and “down to earth” as anyone I’ve ever met, and after we tossed back at least 4 or 5   Heinekens from the open bar, I was inspired to ask if HE could explain blockchain in a way that people would understand. He offered up what I consider to be the best explanation of the essence of blockchain I’ve ever heard. “Blockchain is a protocol where everyone agrees on what time it is, and in exactly what order things happened”. For all my time investigating the esoteric language of the blockchain culture, I had never heard it described so eloquently and succinctly. He said he’s been composing with that explanation for a very long time, and I had a sense that being the perfectionist he is, he’ll figure out a way to refine it even more.

The next day we asked him to explain on camera the new payment system that he and his team developed, and he immediately obliged. Payment systems seemed to be a common theme discussed everywhere at Consensus 2019, with many projects claiming to have the best solution for high transaction speeds, and low cost. Dan gave us a quick demonstration using an off the shelf payment card and his cell phone. His theory is that most people are already comfortable carrying and using these cards, therefore no learning curve is needed. He also indicated that most people are very familiar with the concept of loading fiat funds on their card.

So, what’s the big deal with the Radix approach? Using a $2 off the shelf payment card (branded Radix in this case) Dan demonstrated how quickly and easily a merchant can collect funds from a customer, and how those funds become accessible in the merchant’s account within only a few seconds. The advantage Dan pointed out is that most merchants are burdened with high fees for “point of sale” systems like Visa. Many of them even have to leverage credit continually to manage cash flow until funds arrive in their account many days later.

Radix, being a high transaction, low fee network that uses sharding as method of creating consensus at near infinite scale seems to be poised to provide the rails for payment networks to achieve the throughput at the scale and speed required in a global economy. Dan mentioned this will cost of approximately $.01  per transaction, and  3rd parties like Visa and banks are not a part of the transaction equation.

There’s much about Radix’s Tempo protocol that most people in this world will never understand, but from what we’ve gleaned from the Radix website, the essence of Tempo really is all about “everyone agreeing on what time it is, and in exactly what order things happened”. Well, not necessarily everyone, since “sharding” means the network is split, or divided into shards so that not every node “or computer” has to receive and agree on the transaction in order for consensus and finality to be achieved. This is one reason for the linear scalability claimed by Radix. As they put it, the more nodes operating on the network, the faster the network becomes.

It seems to me that with AI, IOT and 5G becoming mainstream in the next several years, trillions of devices will be continually transacting at volumes that will require networks that can scale infinitely, and, increase in speed with a larger network. Data will be transacted more than currency. It will flow like water, and every movement is a transaction. It seems every blockchain project wants to claim scalability and speed in order to achieve some grand “better than bitcoin” status.

Albert Castellana claims that Radix have already successfully replicated EVERY transaction on the Bitcoin network since it’s inception roughly ten years ago. When I asked why they did that, he indicated that they wanted to prove the speed and accuracy of the Radix network. He proudly indicated that on accurate replication with confirmantions has been achieved in under 1 hour and the Radix network achieved more than 1 million transactions per second. See this article  on the Radix website to learn more about the test they ran on over 1000  servers evenly distributed around the globe. Cramming 10 years worth of transactions into 1 hour should be an indicator that long waits and high fees for consensus, and finality in transactions may be a thing of the past if Radix have their say.

For More About The Radix Test see: https://www.radixdlt.com/post/scaling-dlt-to-over-1m-tps-on-google-cloud/